What Happened This Week?

This week we wrote about a few of our investments that had news:

Yesterday Creso Pharma Ltd. (ASX:CPH) released what we thought was a coverage-worthy bit of news that it was going live in the US markets that night under code COPFH.

We wrote that we thought CPH might pop on it’s US listing... and it did, this morning closing at 22c AUD equivalent. Let's see what CPH does in Australia on open next week - check out yesterday's CPH US Listing article here (CPH’s US big brother Mind Med is also up 30% in the last 10 days - start of another sector run?)

Oneview Healthcare (ASX:ONE) our Tech Pick of the Year for 2021 signed its first ever deal of its new cloud offering (a key investment milestone for us). It was a 5 year deal and ONE got it done much faster than we expected. Lot of planets are aligning for this company and we are very excited about our investment in ONE. ONE’s share price chart is looking very healthy indeed - read our commentary here

Thomson Resources (ASX:TMZ) silver assets were looking nice and big to some experts that TMZ brought in to check them out - TMZ acquired a few silver projects and has combined them together just as the silver price is looking strong, The experts are re-analysing the asset to update TMZ’s silver resource size - read our commentary here

88 Energy (ASX:88E) purchased back 100% of the Peregrine project and we increased our position at 2.5c for a patient hold into next year’s exploration campaign and further analysis of Merlin-1 result - read our commentary here

Vonex Ltd (ASX:VN8) just announced a new acquisition of a business that delivered $15.6M revenue with an EBITDA of approximately $5M in CY2020 - we like the acquisition as it will hopefully move VN8 up into the next tier of telcos. We like that the $31M transaction will be done mostly for debt, which is cheap money in the current economic climate - read our commentary here

Over the past few weeks we have been rolling out our “investment milestones and company investment strategies” for each of our portfolio companies, currently we have shared ASX:ONE, ASX:BPM, ASX:EMN, ASX:PRL, ASX:VUL, ASX: VN8 and ASX: EXR.

This week we added investment plans and milestones for our investments in ASX:88E, ASX: CPH and ASX: TMZ. We aim to have the rest of the portfolio done in the coming weeks.

We read a lot about what’s happening with the world and how that affects our portfolio companies. At the end of this email we have shared this week’s global news relating to CPH, VUL, EMN, PRL, GTR and 88E.

🗣️ Quick Takes - Our Other Investments:

Vulcan Energy Resources (ASX:VUL) looks like it wants to go for a run after closing on a 5 month high of $8.80 - the VUL chart is looking very solid. In the last 20 minutes of trading on Friday VUL announced it is spinning out its original European battery metals assets (Nickel, Copper and Cobalt) into a new IPO called Kuniko.

Here is Kuniko’s website - ethically sourced battery metals in Europe is currently our favourite investment thematic. We love the idea of Zero Carbon Cobalt, Zero Carbon Nickel and Zero Carbon Copper and we think the Kuniko IPO is going to be one of the most talked about of 2021 off the back of Vulcan’s stellar success and execution to date in Zero Carbon Lithium - we are definitely participating in this one.

Pursuit Minerals (ASX:PUR) announced it has received final heritage approvals and drilling can now commence on its project near Chalice Mining’s multi-billion dollar world class Julimar nickel-copper-PGE discovery - the market is still loving Chalice and other surrounding Julimar players, so it should be an interesting run up to drilling (especially if one of other Julimar hopefuls hits something first).

Minbos Resources (ASX: MNB) announced that a new fertiliser blend that can be incorporated in production from the group’s granulation plant has the potential to deliver healthy, organic crop yields for Angola and its farming communities for decades to come. MNB has lodged an Australian provisional patent application.

Tempus Resources Ltd (ASX: TMR, TSX.V: TMRR, OTCQB: TMRFF) announced it had restarted drilling at its Elizabeth Gold Project in. Canadian drilling season is now officially back - we have been holding TMR for a while now and recently significantly increased our position in the TMR placement.

Yes, it's another AHI term sheet, but we will soon provide a detailed AHI update to help make sense of the continuous stream of AHI announcements, which announcements are material and how and when we expect them to translate into increased revenue for AHI.

GTI Resources Ltd (ASX:GTR) has received approval from the state of Utah for the second phase of uranium exploration on Section 36 - our investment in GTR has been in the bottom drawer lately as we wait for the Uranium price to rebound... which it is starting to do now.

🦉In our other portfolios 🏹

Our later stage investment portfolio Wise-Owl covered it’s eleventh portfolio addition Iron Road Resources (ASX: IRD). We invested in IRD because iron ore is booming and IRD’s iron ore project is at a later stage with a realistic path to market. We also like that the market doesn’t really know about IRD yet.

🦉 Read the full report here: With a Rocketing Iron Ore Price, it could be IRD’s Time

We finished the week off on Wise-Owl with an update on all the movement in the EV sector this week and how it affects our three battery metals stocks: Vulcan Energy (ASX:VUL), EuroManganese (ASX: EMN) and European Metals Holdings (ASX: EMH).

Over at Catalyst Hunter, Mandrake Resources (ASX: MAN) reminded us that they would be drilling on 14 June - next week. MAN’s targets are just 30km from Chalice Mining’s multi-billion dollar world class Julimar nickel-copper-PGE discovery. We were caught by surprise when MAN lobbed in a cap raise almost straight after the announcement, but are happy they now have $12M more in the bank.

📰 Here’s what happened on this week on Next Investors

Our silver investment Thomson Resources (ASX:TMZ) this week announced a group of experts are re-analysing historical data from its multiple silver projects in order to re-model the silver resource size.

And early indications are that TMZ’s assets look bigger than they used to...

This comes at a time when the silver price continues its strong performance and appears to be tracking with inflation. The precious metal captured everyone's imagination during a “silver squeeze” that came and went back in early 2021.

VN8 to consume its biggest ever acquisition

Last week we updated you on our telco investment Vonex (ASX:VN8) - VN8 is on an acquisition strategy at the moment, gobbling up smaller telcos.

A few hours after the release of our update, VN8 caught us by surprise and went into a trading halt pending a material acquisition...

Today that acquisition has been announced to the market.

VN8’s new acquisition is for a business that delivered $15.6M revenue with an EBITDA of approximately $5M in CY2020.

The acquisition will cost $31M, and according to VN8 will be paid for primarily via a debt facility.

The deal is expected to nearly double VN8’s recurring revenue up to $32M, and almost triple its SME customers, taking them up to 8,567.

Read it here: VN8 to consume its biggest ever acquisition

Our Tech Pick of Year for 2021, ONE announced a 5 year contract for its recently launched cloud based offering with Victoria's largest private health service, Epworth HealthCare.

The contract is for all 1,440 of its beds for 5 years on ONE’s new cloud offering.

This is an extremely important milestone for ONE’s new cloud offering and it has happened much faster than we had expected.

Note, the contract size was significantly bigger and longer in duration than we expected as well.

CPH’s US listing is happening tonight - trading as OTC: COPHF

CPH today announced it has listed in the US on the OTC.

The listing gives CPH greater exposure to a deeper capital market as well as greater access and liquidity for North American investors. Further to this, it provides additional opportunities to attract institutional and retail investors and for CPH to expand its investor base in the US.

The listing follows enormous interest from a large range of US investors as CPH has gradually built up a presence in the cannabis and psychedelics markets.

A US listing will allow CPH to fast track its move into psychedelics as the company looks to close out its acquisition of privately owned Halucenex Life Sciences.

Read it here: CPH’s US listing is happening tonight - trading as OTC: COPHF

Alaskan oil explorer 88 Energy has cut a deal to buy back its 1.6 billion barrel Project Peregrine, and now holds 100% of it once again.

After the Merlin-1 drilling event clearly demonstrated the presence of oil at the project, the ground is arguably more valuable than ever - pending further drilling, testing and analysis to find out exactly how valuable.

The reason given in the announcement by both parties was that 88E wants to move fast to drill again but APDC needed time to raise their share of the funding. To avoid slowing down the project this deal was cut allowing 88E to move fast with 100% ownership/control and APDC to retain exposure to project success.

🌎 What happened this week on mainstream media

Reuters: Mike Tyson says psychedelics saved his life, now he hopes they can change the world

Thanks Phil for sending us this article above. If you have any other articles that you would like shared in the weekly wrap up about our investment portfolio please send them to [email protected]

Bloomberg: G-7 Eyes Ambitious Shift to Electric Cars and Away From Oil

Woodmac: Why green hydrogen is reaching a tipping point

Bloomberg: Waterton said to seek up to $1 Billion for Quebec Nickel Mine 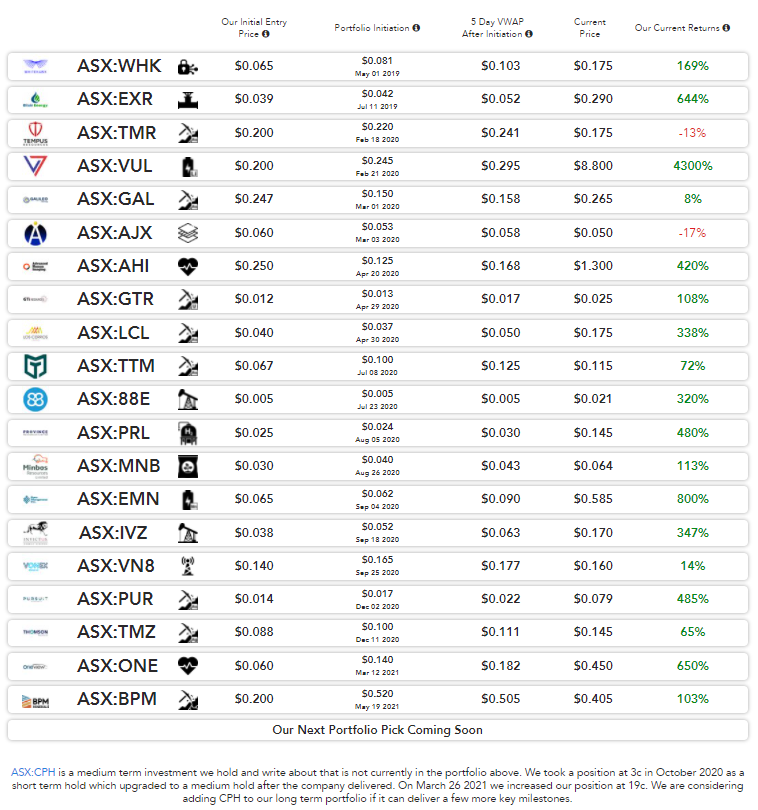 Our Top 4 ASX Stocks to Benefit from a Biden Presidency